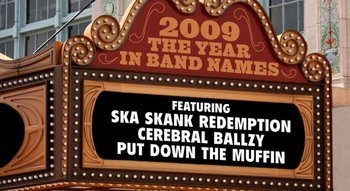 Rememeber back in the day, when the biggest criteria for naming your band was how it would look on the marquee or "let's not give any ammo to a snarky rock critic by calling ourselves The Suck?" Well, life in the modern age has certainly complicated the process.

Now you have to make sure that your name is easily searchable and that there aren't four other bands that share it. On the plus side, sometimes you can be in for a nice surprise when the digital stars align. Take this week's example of an otherwise obscure band called Me Without You which is benefiting from a Twitter trending topic phenomenon. I'll let Simon Dumenco of Ad Age explain:

"But my favorite Top 10 brand this week is MeWithoutYou, a crew of Philadelphia alt-rockers (you can listen to a bunch of their songs at their official MySpace page) who've been described as Bright-Eyes-plus-Neutral-Milk-Hotel (two of my all-time favorites, by the way). They're a great band, but the Twittersphere apparently misinterpreted #MeWithoutYou as one of those fill-in-the-blank Twitter self-amusements (which then morphed into its own hashtag, #MeWithoutYouIsLike).

Well, it's definitiely better than sharing a name with a serial killer which is why I guess the authorities always include the perp's middle name.

DS
Posted by Daniel Savage at 12:08 PM No comments: