I Want Therefore I Am 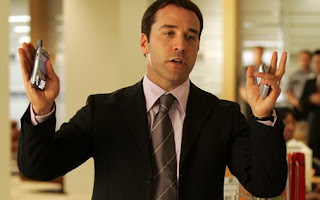 The only kids I have have four legs and a tail so I don't claim to be an expert in child rearing. But I'm pretty sure that any parent is running into dangerous territory when their progeny decides they want something and Mom or Dad tell them they can't have it. "Why?" "Because" = Highly unsatisfying for all involved.

The music biz has a rich history of such behavior. I've been in the meeting. "Let's be at Top 40 for 10 to 12 weeks before we put out the album, and let's not make anything available for sale. Let's tell the fans, "Listen, I know you like our artist, and apparently you like the new song, but we're not going to give you any opportunity to act on that until the album comes out in two months." If I were Lefsetz, here's where I would disolve into some sexual metaphor, but let's skip all that. "Seriously? You're not going to let me buy a single? Well, screw you, I'll just steal the album when it comes out. So there."

You'd think the TV biz would learn something from this. And there are signs that they're getting it, like with Prime On Demand, which I just discovered on my Mother's Time Warner Cable box in New York. How cool. I missed "Rescue Me" and (like my mother) I don't have a DVR, but I can watch the latest episode whenever I want. So that's what makes my latest "Entourage" experience that much more confusing and maddening.

I was hanging in my client's office in New York and talk turned to some scene from last season. I had to admit that while I had watched the first few seasons, I checked out on the latest season. I probably had too many "Numbers" episodes to watch. I was immediately upbraided and encouraged to go watch Season 5, especially as Season 6 was starting on July 12 (as the billboards and full page ads told me). Cut to my flying home on Virgin America and having the chance to watch two Season 5 episodes as part of their Premium TV offering. Turns out that I actually do like the show. I guess I need to catch up in the next two weeks.

Upon coming home, after shaking off my Xanax hangover/jet lag, I go to the iTunes store. No Season 5. I got to my TIVO box. No episodes planned. Finally I go to Amazon. Sure there's Season 5 on DVD and it's on sale starting June 30. WTF?

The last episode was six months ago. You couldn't make it available until now? Two weeks before the new season? We live in the digital age; what's with the wait? If I weren't such an industry icon (and, more importantly, afraid of computer viruses) I'd just get the whole season on a torrent site and leave it at that. HBO is leaving money on the table for reasons only know to those in that Wednesday marketing meeting. HBO, the company whose former head, the insufferable Michael Fuchs, thought he could run the Warner Music Group, only to run right into a brick wall of cultural and business operational differences. Hmmmmmm.

This whole situation, has reinforced for me the need for the music business to honor the time-tested ethic. "Give people what they want when they want it." No more big windup, "we have to put out the image track first then we'll come with the real first single and then the album 8 weeks later." When it's done, put it out. It's not about first week Soundscan, bought with $6.99 pricing at Best Buy. It's about PROFIT. And the more you match consumer desire with product, the more money you make.

Contrary to what the content companies might think, the consumer is the only reason you're in business. Refuse to meet demand at your own peril.
Posted by Daniel Savage at 7:36 PM No comments: