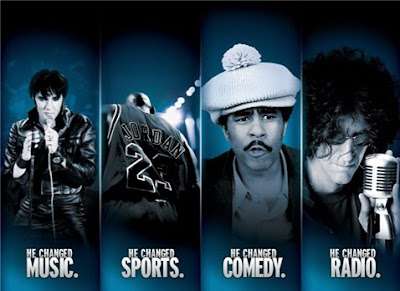 If you want a good stock tip, go short on Sirius XM because their new adveritsing campaign betrays their utter cluelessness.

I'm not sure how much they're spending, but I've seen the TV spots a fair amount and a double truck ad in today's Los Angeles Times. It celebrates their own Mt. Rushmore of Change--Elvis, Michael Jordan, Richard Pryor and, of course, the increasingly irrelevant and polarizing Howard Stern--and implores us to "change the way we listen to radio." The muddled connection they try to make is that each of these figures changed the world in which they worked, and now Sirius is following suit.

Unfortunately for them, No one, as far as I know, ever woke up saying, "You know, I really want to change the way I listen to radio." But they may have said, "I've got a long drive today, I wish I could listen to the Packer game."

Years after the "breakthrough" of satellite radio, Sirius is hauling itself back up to the beginning of the product life cycle curve when it should be down where they're proving entertainment value.

Those fantastic DirecTV ads with Ed Begley point out that they have a lot more HD channels than the cable company. IPhone ads talk about all the great apps you can get, not why you should have this great new thing called a cell phone. Viacom didn't push the message that Cable TV is going to change your life, but brainwashed a generation into thinking that they wanted to see music on television via "I want my MTV."

People love listening to the radio. All you have to do is tell them that what they already like can be better--sound quality, variety of programming and fewer commercials.

If you really want to talk about a company that's changing the way people listen to the radio, look at Slacker which deftly shifted from the hardware business, focused on their programming and is now experiencing explosive growth via deals with the new Blackberry devices, iPhones and soon, Blu-Ray players and TVs.

The change that Sirius XM needs is their CMO.
Posted by Daniel Savage at 11:33 AM No comments: